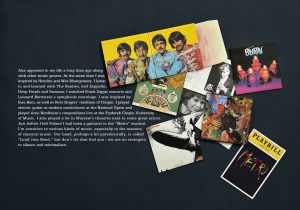 Mirosław ‘Carlos’ Kaczmarczyk – Self Reflections – Jazz appeared in my life a long time ago along
with other music genres. At the same time I was
inspired by Hendrix and Wes Montgomery. I listen
to and learned with The Beatles, Led Zeppelin,
Deep Purple and Santana. I watched Frank Zappa concerts and
Leonard Bernstein’s symphonic mornings. I was inspired by
Ewa Bem, as well as Novi Singers’ rendition of Chopin. I played
electric guitar at modern musicshows at the National Opera and
played Arne Nordheim’s compositions live at the Fryderyk Chopin University
of Music. I also played a lot in Warsaw’s theatres next to some great actors.
Just before I left Poland I had been a guitarist in the “Metro” musical.
I’m sensitive to various kinds of music, especially to the masters
of classical music. Our band, perhaps a bit paradoxically, is called
“Loud Jazz Band,” but don’t let that fool you – we are no strangers
to silence and minimalism.

This site uses cookies to provide services at the highest level. Further use of the site means that you agree to their use.OKTerms (more info)